On May 1, Senator Alberta Darling (R – River Hills) and Representative John Nygren (R – Marinette), co-chairs of the Joint Committee on Finance, released a memo explaining the committee’s voting process. According to the memo, the Joint Committee on Finance will begin voting on May 9. The committee will begin by considering some of the smaller agencies and divisions. 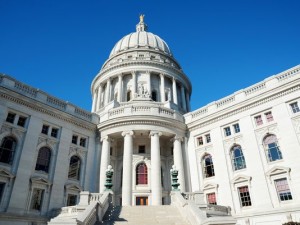 However, its first item of business will be to vote on removing over 70 provisions that have been identified as policy items. Every budget cycle, the non-partisan Legislative Fiscal Bureau scrutinizes the governor’s budget proposal to identify which items are considered non-fiscal policy rather than strictly budgetary and funding proposals.

This year, the Legislative Fiscal Bureau identified over 70 items deemed non-fiscal policy. Among those 70 provisions was a cornerstones of Governor Tony Evers’ budget proposal regarding healthcare.

Evers proposed accepting federal Medicaid Expansion dollars. According to the Evers administration, federal Medicaid expansion dollars would go to provide coverage to 82,000 Wisconsin citizens. Additionally, the administration contended that shifting some Medicaid cost to federal dollars would have generated $324.5 million in savings of state funds. The governor proposed reinvesting that $324.5 million into various state health programs. However, the governor’s proposal is now in jeopardy since it was identified as a policy item.

The announcement sparked a public fight between the Governor and legislative Republicans.

During a press conference in Milwaukee late last week, Evers told the media, “The red states and blue states and purple states all have decided years ago that they will take this money and invest in their citizens… It’s a shame that we are standing here today saying that the Republican majority of the legislature is working against the will of the people in the state.”

At a separate media event in Milwaukee, Republican Assembly Speaker Robin Vos said, “It’s our job to lead, which means we don’t just simply put our finger in the air and ask people what they think we should do. We have to actually take all the information and make a decision that is in the best interest of the state.”

Evers is not currently willing to state if he’ll veto a budget bill if it doesn’t include Medicaid expansion.

As noted previously in the HC Report, in March a Dane County Circuit Court Judge Richard Niess issued an injunction against the legislation passed by the legislature and signed by Governor Scott Walker in December 2018. In doing so, Niess prevented the laws from being enforced.

While the appointment confirmations were invalidated, the appointments themselves were not invalid. As such, Governor Tony Evers rescinded all eighty-two appointments, which meant those appointees ceased all service in their duties.

In the weeks that followed, Evers re-appointed all but fifteen of the Walker appointments, and attempted to appoint his own selections for the fifteen positions.

Evers’ rescindment and denial of fifteen positions to Walker appointees caused a political fight between the Governor and the Republican-controlled legislature. The State Senate stopped all action on confirmation proceedings for Evers cabinet secretaries.

The appointment standoff came to an end on April 30 when the State Supreme Court ruled 4 votes to 3 to restore all appointees confirmed during the 2018 lame duck session. The ruling meant that all eighty-two Walker appointees could resume their roles within state government. It was a significant win for Legislative Republicans.

As of this writing, the State Senate has given no indication on when or if it will resume confirmation proceedings for Evers’ cabinet secretaries.

While exact details have yet to be made public, reports indicate Senator Alberta Darling (R – River Hills) suffered a medical complication while in Washington, DC late last week. Darling and other legislative Republicans were in Washington for an annual Wisconsin fundraiser.

Darling currently serves as co-chair of the Joint Committee on Finance, which is slated to begin voting on the budget on Thursday, May 9. According to a press release from her office, Darling will not be able to attend the May 9 meeting. The release did not indicate when she may return.

Look for updates to this story in the next HC Report.