This week the State Senate and Assembly passed legislation to allow Medicaid providers to seek reimbursement for services provided via telehealth. Telehealth, sometime called telemedicine, is the delivery model in which technology is utilized for healthcare providers to remotely speak to, treat, and monitor patients.

The passage of the bill is important for a number of healthcare providers, including home health agencies. The Wisconsin Association for Home Health Care (WiAHC) lobbied in support of the bill at each step in the legislative process.

WiAHC is a membership-based association that represents home health care agencies and their staff. The association helps to support the common interests of its members to promote home health care as a quality, cost-effective health care option in Wisconsin. Home health care comprises a variety of health care services and is a convenient option for the individual able to be at home but needs the extra assistance that cannot be provided solely by family or friends.

The bill is now headed to Governor Evers’ desk for his approval.

On Tuesday, November 5, the Wisconsin State Senate met to vote on the confirmation of then Secretary-designee Brad Pfaff, who was appointed by Governor Tony Evers to head the Department of Agriculture, Trade, and Consumer Protection.

During debate on Pfaff’s confirmation, Democrats accused Republicans of “playing politics” in voting down the appointment. Specifically, Democratic senators questioned why every Republicans would vote against Pfaff when the Senate Committee on Agriculture, Trade, and Financial Institutions unanimously recommended Pfaff’s confirmation on a 9-0 vote, 5 of those being Republican.

After the vote, a frustrated Evers called the vote “political B.S.” and said, “This was a vote against Wisconsin farmers.”

No Action on Special Session 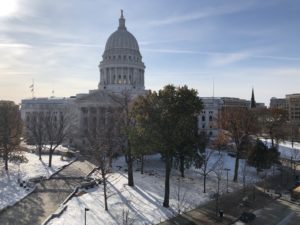 The bills, a “red flag” law and universal background check proposal, were met with immediate opposition from legislative Republicans.

On November 7, Senate Majority Leader Scott Fitzgerald and Assembly Speaker Robin Vos quickly gaveled the special session in and then immediately gaveled it out without any debate or vote on the bills, as expected.

On the morning of November 7, Evers delivered a letter to Fitzgerald and Vos urging them to hold votes on the bills. The letter said in part, “You are only two of 132 members of the Legislature. The people of this state expect more of their elected officials and they deserve to know where each of those 132 members stand on these commonsense proposals.”

Legislative Democrats harshly criticized their Republican colleagues. In a press release, Assembly Minority Leader Gordon Hintz said, “While our children are forced to endure active shooter drills in school, Wisconsin Republicans choose inaction on the pressing issue of gun violence in our state.”

Fitzgerald defended Republican actions, saying, “In recent months we’ve seen liberals across the country run on a platform of support for gun confiscation, and Governor Evers himself has left the door open on backing similar proposals.”

Stay tuned and subscribe here for future HC Reports delivered to your inbox!